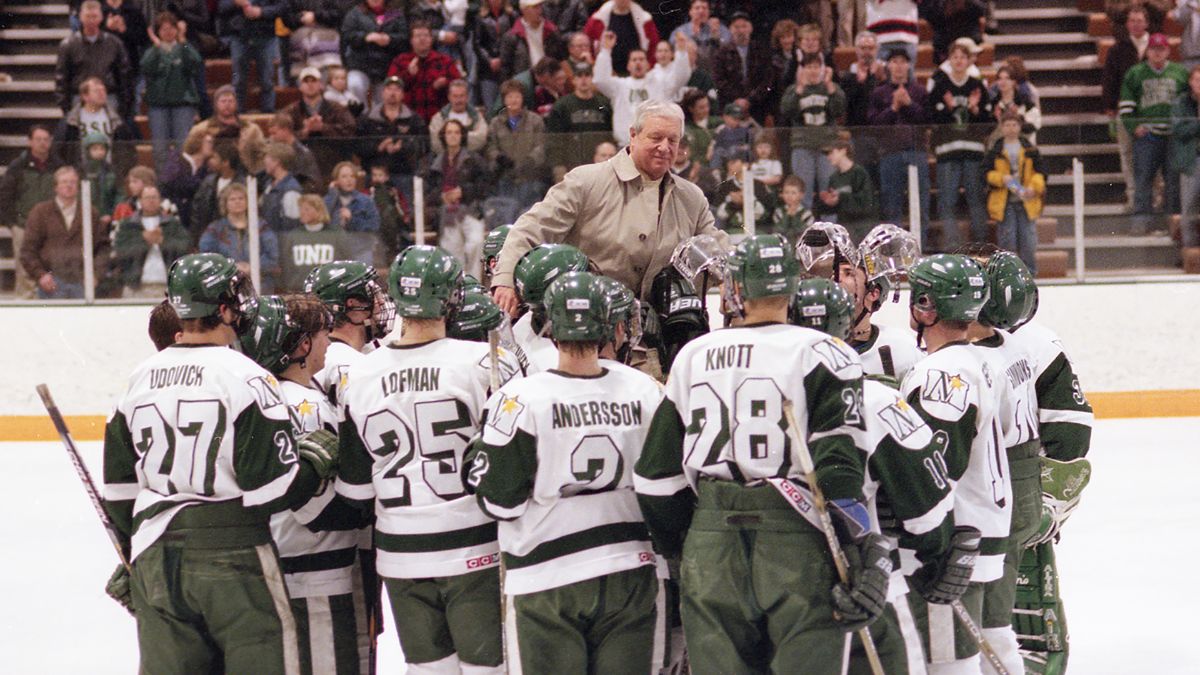 A pillar of the Bemidji State University and collegiate hockey community is gone today as longtime head coach, athletic director, and instructor R.H. “Bob” Peters passed away Wednesday at his home. He was 84.

Peters’ involvement at Bemidji State began in 1966 and was woven through its buildings, programs, and teams, specifically its men’s hockey program until his retirement in 2001. The BSU coaching legend mentored Beaver Hockey players and led the Beavers to 13 national championships and national prominence in 35 years at the university.

While the early building blocks were already in place, it was not until Peters took the reigns as the program’s fifth head coach in 1966 that Bemidji State hockey began to take shape as a recognizable masterpiece. Although Peters himself would not claim to be an artist, he constructed a dynasty in Bemidji, Minn. which remains unparalleled in the world of collegiate athletics.

Peters entered the college hockey head coaching ranks in 1964 as bench boss at the University of North Dakota. During his initial campaign, Peters, the eventual Western Collegiate Hockey Association Coach of the Year, led the Fighting Sioux to a WCHA title and a third-place finish at the NCAA Championships. He coached in Grand Forks for two seasons, leading the Sioux to a 42-20-1 mark before making a career decision that would change the face of collegiate hockey.

Peters left the Division I powerhouse in 1966 and took over a small-college program in the early stages of its existence – at Bemidji State. Within two seasons Peters led BSU to its first national title and set the foundation for what would become one of the most dominant programs in college hockey.

Thirty-five years later, Peters retired from coaching with one of the most impressive lists of achievements in the history of collegiate sports – 744 victories as a head coach, 702 coming at Bemidji State alone to make Peters the first coach to win 700 or more games at a single school, 13 small-college national championships, and still-standing national collegiate records for most wins in an unbeaten season (31-0-0 in 1983-’84) and longest unbeaten streak (43 games from Nov. 8, 1983 to Jan. 1, 1985). Today, only five coaches in the sport – Jerry York, Ron Mason, Jack Parker, Red Berenson, and Rick Crumley – have won more games at the collegiate level, while Peters remains eighth on the NCAA list of winningest coaches with a career .695 winning percentage.

Peters, the only coach to lead a team to a national championship game in three divisions of college hockey (Division II, III, and NAIA) and developed five NHL players and numerous Olympians and All-Americans.

A 1960 graduate of the University of North Dakota, Peters spent his collegiate days at goaltender for the Fighting Sioux. He coached at the high school level for one season before rejoining the UND staff as an assistant coach.

Retired from coaching, Peters remained heavily involved in the sport of college hockey. From April of 2001 to July of 2008 Peters was the commissioner of College Hockey America conference.

College Hockey America is the third conference Peters was involved with as a founding member, and with more than four decades of experience in college hockey, Peters’ leadership was invaluable as the CHA evolved.

The original concept for the CHA began with Air Force head coach Frank Serratore and then-BSU head coach Peters at the 1998 hockey meetings in Florida. The conference sprang forth the following year with a full league schedule in the 1999-2000 season. Then in the fall of 2001, under the guidance of Peters, the CHA gained an automatic bid for its tournament champion in the 2003 NCAA Tournament.

In addition to appointing Peters CHA Commissioner, in 2001 the athletic directors of the league’s member institutions approved the recommendation by the coaches to name the regular-season championship trophy in honor of Peters as the R.H. “Bob” Peters Cup—an appropriate honor capping an illustrious coaching career.

Peters’ influence on college hockey also has stretched outside the arena. He has proven his administrative skills at Bemidji State by serving as athletic director and head hockey coach, and he lent service to several committees. Under Peters’ guidance, BSU hockey progressed from NAIA to NCAA Division III to NCAA Division II, and in 1999, BSU elevated its hockey program to Division I. He served on championship committees for the NAIA and NCAA for over 20 years, and in 2001 was named a Hobey Baker Legend of Hockey. Peters continues to provide support to the Bemidji State athletic department. He announced his retirement from the BSU faculty in 2003 but remains with the University in an outreach role with the BSU Foundation.

Peters remained close to Bemidji State and its hockey programs after his retirement in 2003 in an outreach capacity for the BSU Foundation, as a season ticket holder, frequent visitor to the rink, or a stroll through campus.

In 2010 and in conjunction with the opening of the Sanford Center, the ice sheet was named R.H. “Bob” Peters Rink in his honor.

Peters' obituary and information on funeral arrangements can be found here. Donors can support the Peters' legacy by making a gift to his endowment at Bemidji State here.