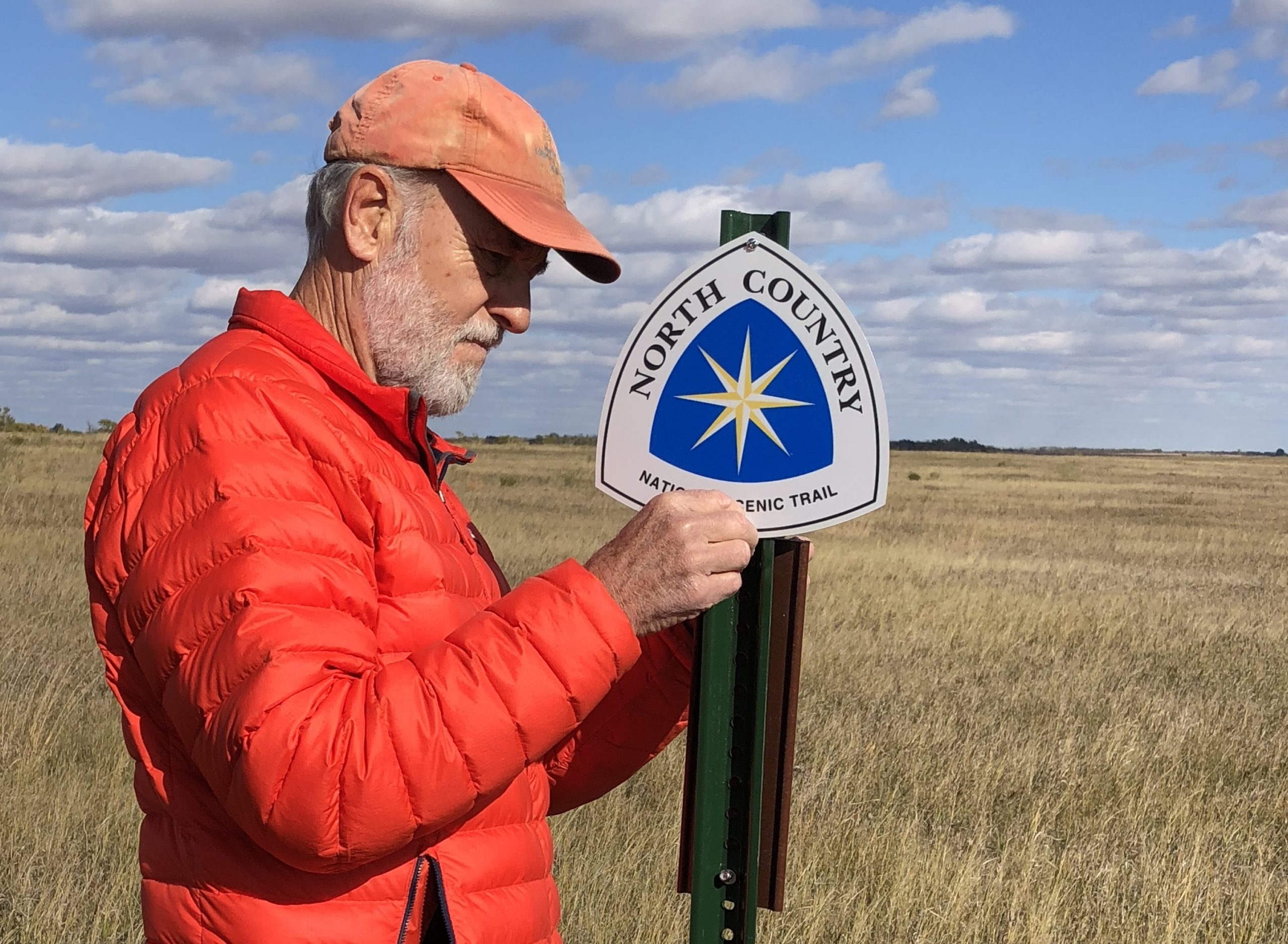 Bemidji State University grad Tom Moberg ‘64 is making it his mission to honor the history of the Indigenous people who for centuries called southeastern North Dakota home along the country’s longest scenic hiking trail.

The North Country National Scenic Trail — the North Country Trail (NCT) for short — currently stretches 4,600 miles from North Dakota to Vermont, intersecting widely diverse landscapes including sprawling grasslands, rich farmland, cityscapes, many rivers and streams, along three of the Great Lakes and through the Adirondack Mountains. It is one of 11 National Scenic Trails in the United States created after the National Trails System Act of 1968, including other famous trails like the Appalachian and Pacific Crest Trails.

Moberg, who hails from Fargo, North Dakota, has a “home trail” — 90 miles of the NCT that crosses southeastern North Dakota between the Sheyenne River State Forest near Fort Ransom and ending at Fort Abercrombie State Historic Site along the Red River near Abercrombie. He, along with other volunteers from the Dakota Prairie Chapter of the North Country Trail Association, maintain the trail by clearing obstructions, mowing, working to obtain easements from private landowners to expand the existing trail and maintain appropriate trail signage.

In 2019, Moberg and other volunteers from the Dakota Prairie Chapter identified the need to give trail users information through interpretive kiosks along the trail. Early on in the project, Moberg knew that acknowledging the full history of the land the NCT crosses was important, so a special focus was made to acknowledge the Indigenous people who called the area home for thousands of years before widespread European immigration began in the area only a few hundred years ago. “We had to tell the prehistory of the area,” Moberg said. “We know people were here for 15,000 years [before European contact], so how do we tell that story?”

Moberg spent countless hours researching the history of Native American tribes in the area, consulting with historians and researchers and poring over books, journals and photographs from the North Dakota State Historical Society, North Dakota State University Regional Archives, Fargo Public Library, the Knife River Indian Villages National Historic Site and others. This deepdive presented Moberg with the information he needed about the history of the area’s earliest people, known as the Mound Builders, the Plains Indians and the early relationships between Native Americans and European settlers for the kiosks.

Grants and private donations funded the cost of materials for the kiosks, but the task of constructing and placing them along the trail fell to Moberg and his fellow volunteers. As of October 2021, six kiosks have been placed along the trail between Lisbon and Abercrombie. In line with the trail’s goal of helping users understand the natural, historical, cultural and scenic features of the trail, making the signs accessible to the public was key.

“The six kiosks are all in locations you can get to by vehicle,” Moberg said. “You can take your family on a Sunday drive and learn the history that happened in that very spot.” Originally from Pequot Lakes, Moberg earned a bachelor’s degree in mathematics from Bemidji State in 1964, a master’s in mathematics from North Dakota State University and a doctorate in statistics from Iowa State University while nurturing a lifelong career in higher education, teaching math and working in senior-level technology and information management roles for universities throughout the U.S.

After retiring in 2006, he and his wife, Mary, became involved in the NTC by adopting a three-mile stretch of the trail in the Chippewa National Forest north of Remer. When he found there was no active NCT chapter in southeastern North Dakota, the Mobergs were instrumental in forming the Dakota Prairie Chapter. They wasted no time recruiting members, planning new trail routes and growing the trail’s presence in the area. “It meets our need to do volunteer work that we feel is meaningful, the need for exercise and all the dimensions of working with interesting people and organizations,” Moberg says of their involvement in the chapter. “We think our involvement helps make a positive change.”

In 2013, the Mobergs created the Moberg-Calhoun Leadership Scholarship at Bemidji State in honor of their parents — two staunch believers in the importance of education. The award is given annually to students who demonstrate leadership potential and respect for other cultures, and are well-rounded.

The goals of both the couple’s scholarship at BSU and the kiosk project along the NCT are the same.

“We want people to have educational experiences that will help them be the people they want to be; the type of people we so desperately need,” Moberg says, referring to the impact learning about history, cultures and one’s environment has on students and the public alike. To learn more about the NCT and the Dakota Prairie Chapter, visit: www.northcountrytrail.org